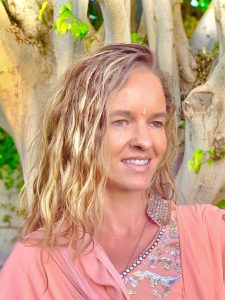 Lisa Rae Jacoby is an enthusiastic Certified Ayurvedic Practitioner who works with people to maintain and improve health. She knows that you must uncover the root of any problem to relieve suffering and by avoiding the causative factors of dis-ease, you can eliminate a large majority of illnesses. This is why she believes so much in educating her clients on how to create balance in every aspect of life and the reasoning behind it. Ayurveda states that physical imbalances can cause mental disturbances and mental imbalances are therefore reflected at the physical level; it is here where Lisa discovered the significance of the relationship of mind-body health, which Ayurveda clearly explains.

Lisa Rae’s motivation behind entering into the oldest system of medicine known as Ayurveda, is to bring the awareness, not only to herself and her family but into a practice. The best possible outcome she claims:

“-is by merging the best of both worlds. Where East meets West and where ancient time-tested philosophies & plant medicine meets today’s massively expansive technologically advanced system of medicine: Integration of ALL medicine because truly there are no boundaries when it comes to the ability to make a difference in even one person’s life.”

She began her journey in medicine in a small mountain town in Colorado, where she was born. Here, she was greatly influenced by an ophthalmologist who trained her in the operating room and is currently a Certified Ophthalmic Assistant from the Academy of Ophthalmology since 2006. In 2014 she broadened her ophthalmic surgical assisting experience by working for a mobile eye surgery company, where she travelled throughout the U.S. and assisted many surgeons in cataract, glaucoma, retina and lid surgeries. In 2016 she was led to California, which changed everything! She started working at yet another eye doctor’s office and quickly realized how much opportunity was here, at her fingertips in Los Angeles.

While addressing her own imbalances, Lisa attended therapies including a 10-day silent meditation, known as Vipassana. Silent meditation now became the biggest voice of reason… Afterwards, determined to go back to school and continue as health care provider, she stumbled across Ayurveda. 2-clicks later she had an interview with a woman named Naomi @ Southern California University of Health Sciences. Now accepted and enrolled into a program that she knew nothing about, she took a big risk, as Western medicine was the only awareness that occupied her practice.

About 6 months into the program, she had convinced her father that there was hope for his chronic lung illness that Western Medicine hadn’t anymore answers for. He was being treated by a doctor at National Jewish Hospital, ranked #1 in pulmonary lung disease and they had limited treatment plans for her father; steroids, antibiotics and good luck! Truly the biggest task at hand was getting her father to travel from the brisk and silent woods up in the high Rocky Mountain to this noisy, crowded and fiery Los Angeles, a feat that was well cherished. He trusted his daughter, although it took a lot of convincing, that maybe there was something to this alternative health practice. After his initial consultation he began his journey and felt the best he had in years! He was told to avoid certain foods, ones that he had eaten every day and wasn’t too happy and favor other foods. He was also prescribed custom herbal formulas for his condition. About 1 month later he reported ~ 20% improvement, which was very significant, as he had only been on a slow decline prior to his visit. He now trusted the Ayurvedic approach and it quickly became second nature. It wasn’t long before the rest of Lisa’s family joined the bandwagon and started seeking food that would benefit their constitutions.

“-although my crossing into Ayurveda has only consisted of a few years, I am very confident that this is the beginning of a lifetime of studies. I saw so clearly through a pin-hole of what Ayurveda was all about and now my entire field of vision is embodied by this ‘Science of Life’ and how it plays a role in every aspect of life. It is balance that we seek but how we learn to get there is key.”

Font Resize
Contrast
Accessibility by WAH
Call Us Text Us